The Arts should be accessible for everyone. Learn More 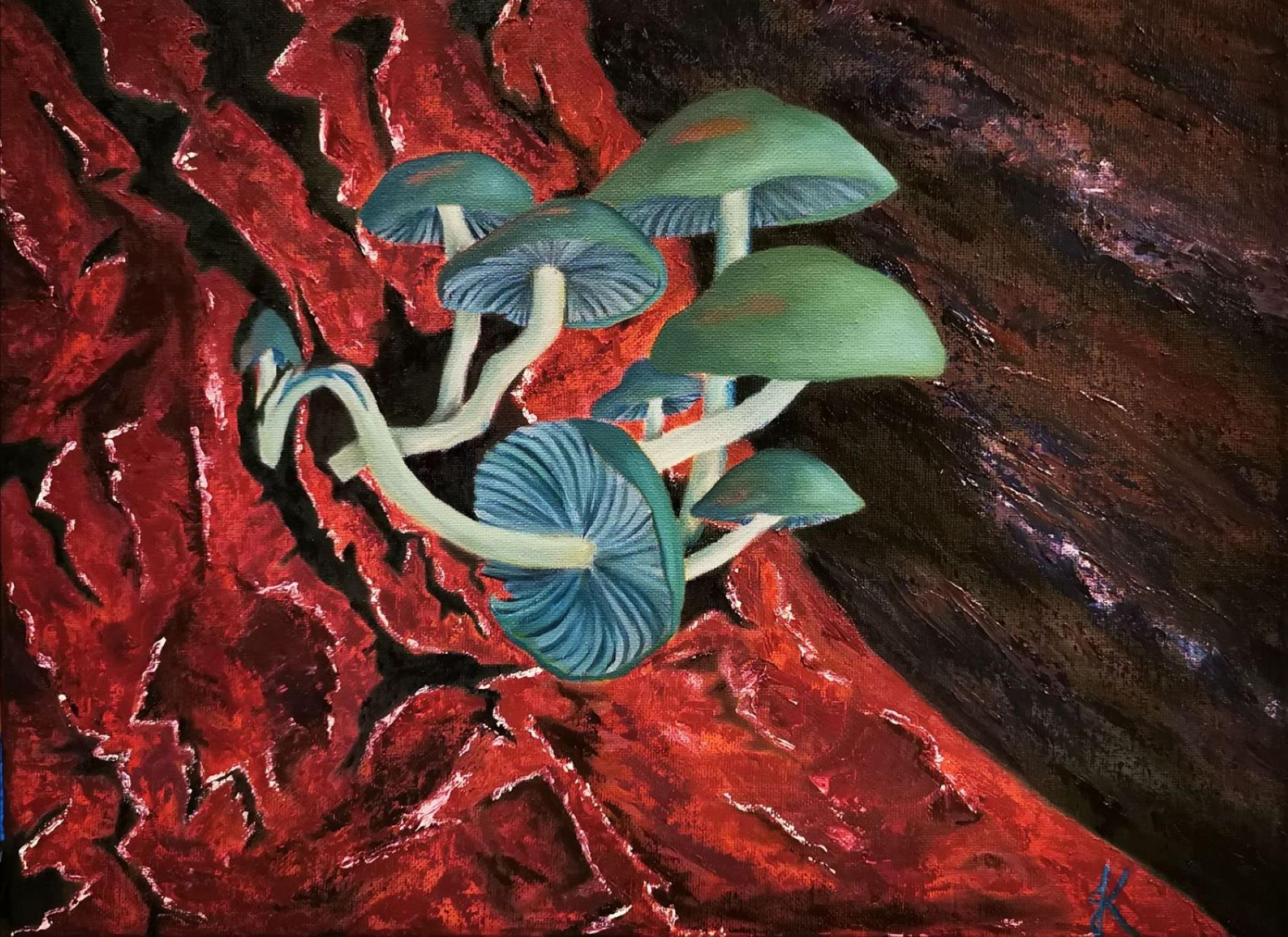 Look beyond, look below, look deep within to find the secrets in this exhibition. From mysterious mushrooms on the forest floor, to the curious colours in a piece of fire-kissed pottery, each work of art encourages an appreciation of the subtle and the sublime.

Julia grew up in the small town of Canmore in the majestic Rocky Mountains. Surrounded by nature, she spent most of her childhood playing games in the forest, building forts and exploring. This connection to nature makes her a very spiritual person and a passionate environmentalist. Both these aspects of her personality are at the forefront in her artwork and in her life. As an artist, she is often found depicting a scene from nature. She also works to translate an emotional/spiritual state of being into her art and when she does this, her work is often more abstract or surreal. The ambivalent quality allows the viewer’s own imagination to go in different directions, open to interpretation as they relate it to their own journey. The goal of Julia’s art is to capture nature’s beauty and inspire an appreciation for it.

“This series of oil paintings depicts different scenes with fungi. Some of the paintings are representational, showing the many personalities and diversity of mushrooms while giving an up-close look at what so many of us walk right past without noticing. In other paintings I am trying to give a surreal glimpse into this unseen world below ground. This is to express how magical and alive this world is.

I have been influenced by Paul Stamets and the “Fantastic Fungi” documentary and “Entangled Life” by Merlin Sheldrake. I also did a Fungi Residency last fall. All of these different resources have had similar overlapping themes. It is hard to simply focus on one aspect of fungi when they have influence over so much of our world. Fungi make up their own kingdom. They have been on this planet since before the animals crawled out of the water over a billion years ago.

With this project, I want to welcome everyone to step into the woods with me and take a look at the ground – and what lies beneath it. A mushroom is just the fruiting body of fungi. The bulk of the organism is made up of mycelium; tiny roots of hyphae that grow and find their way to food, resources and different relationships with other species. Only 8% of plants on earth don’t have relationships with fungi. Though not all of those relationships are symbiotic, many of them are. Mushrooms get carbon from the plants and in return supply different minerals from the soil. They also allow different plants and trees to communicate with one another!”

If you are interested in a print, or would like to request a painting, please contact the artist for inquiries at [email protected] or visit www.newperspectivesgallery.com for more options.

Local ceramic artist Jennifer Poirier began her obsession with pottery over 20 years ago, in the year 2000. Since then, she has studied at Wildflower Art Centre and North Mount Pleasant Arts Centre, both in Calgary, The Banff Centre, Red Deer College Summer Arts Series, and ArtsPlace in Canmore, AB. Working from her home studio, Jennifer creates functional ware which she sells locally under the company name THROWN. Combining her BFA and Bed (University of Calgary), she also enjoys a career instructing students of all ages in ceramics at ArtsPlace.

The pieces in this exhibit represent a deliberate departure from Jennifer's functional line. In these studies, she chooses to use a more primitive and unpredictable technique to fire her pots. Working at the “Family Homestead” in Ethelbert, Manitoba, Jennifer seeks to explore the cultural resonance of her chosen medium. Clay was integral to the establishment of a working farm, used to build the traditional clay oven, clad log buildings, and line dug-outs. Using materials gathered from the grounds to pit fire her work, Jennifer evokes whispers of ancestral memories on the surface of her vessels.

Mateus is a local wildcrafting, mushroom foraging, fermenting, permaculture enthusiast. Growing up in the mountains he was always snacking on the wild flora.

Currently you can find him as the admin of Bow Valley Wildcraft and Ferment on facebook, and at Terrakata.ca where he offers wild edible walks, organic lawn care, maintenance and more.

Chin Shek Lam was born in 1918 in Guandong in Canton, China. He graduated from the Hung-Yi College of Art and prior to immigrating to Canada in 1970 and enjoyed a distinguished art career that included the founding of the Institute of Oriental Art in China in 1944 and, in 1949, the creation of the Institute of Oriental Art in Hong Kong. He also founded the Han-Nan College of Fine Art in Hong Kong in 1954.

Chin Shek Lam's painting was rooted in the ancient art of Chinese calligraphy but he also incorporated Western techniques and approaches influenced by his contact with Pablo Picasso, Joan Miro, and many other western artists who he met during a period of travel in Europe in the nineteen-fifties and sixties. His art drew on his knowledge of the ancient techniques of Chinese calligraphy, and evolved to incorporate aspects of Western colour-field painting. In his work, he sought to express a Taoist way of balancing dark and light, warm and cool colour, and contrasting shapes and patterns. Upon moving to Canada, Lam lived in Vancouver and Calgary from 1981 to 1987 and finally settled in Toronto where he resided until his death in 1990. During his lifetime, he had numerous exhibitions in Europe, Asia, Australia, the US and Canada. His work is represented in many public collections, including those of the Canada Council Art Bank, The Provincial Government of British Columbia and the Alberta Foundation for the Arts.

Into Bloom by Amy Duval

What Bears Teach Us - Free Event