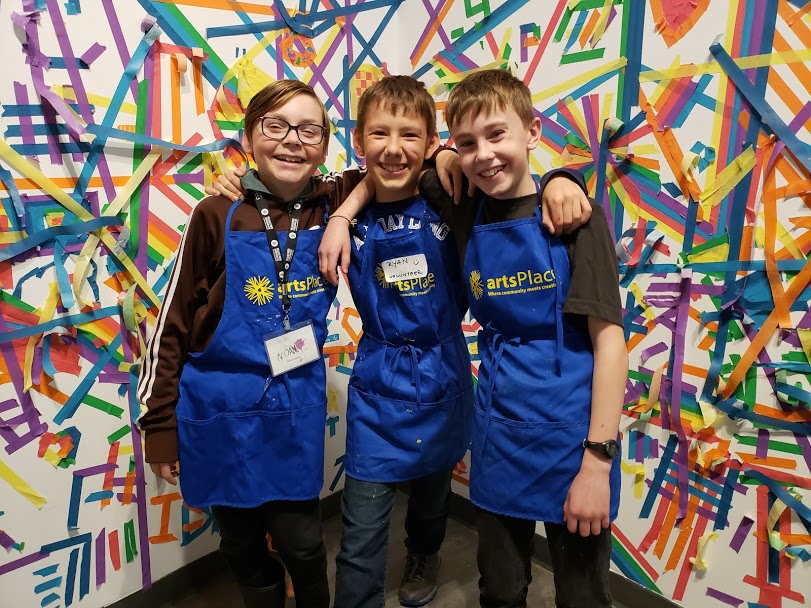 “I’m not an artsy person, but I can do stuff to help other people be good at art,” says Ryan Gregorish. “It’s fun to help people become better at what they love to do.”

Five years ago, Maria Gregorish asked her son Ryan to volunteer during the annual Canmore Festival of Art & Creativity at artsPlace. His job was to ride the famous spin bike that squirts paint onto paper when it’s being pedaled. Ryan enjoyed helping so much, that the next year, Maria was surprised to see he brought several of his friends to come lend a hand at the festival too. Now, in Grade 7, Ryan continues to volunteer at artsPlace with his friend and classmate Julian Coristine.

“artsPlace is kind of like a second home,” says Ryan. Julian agrees: “It’s a place where you can learn to do things you didn’t know you could do and make a bunch of creations. I guess that’s why they call it artsPlace.”

Both Ryan and Julian work the spin bike during the festival and year round, they scan tickets before movies. They have also participated in a variety of art classes and camps.

For both boys, their entry point into the space was through volunteering. But there are many ways for Canmore youth to be engaged with artsPlace.

For aspiring actor and Grade 12 student Liam Brett, it’s through his passion for theatre.

“There are an abundance of opportunities for all ages at artsPlace. Someone might think, ‘I wish I could do that.’ And at artsPlace, they can seek it out and do it, this place is such a central hub.”

Liam says he’s lucky to have artsPlace because it allows him to be involved in acting year-round. He has also been able to meet more people in the Canmore drama scene and says it feels like a family.

“Everyone is supportive; it feels like a family. If you’re doing a show at artsPlace, 30 people will come to watch you,” he says, adding that in addition to his theatre family, his actual grandma comes to cheer him on too.

“artsPlace is a home where people can be themselves. This place has allowed me to confirm who I am and when I’m here, I’m at my happiest.”