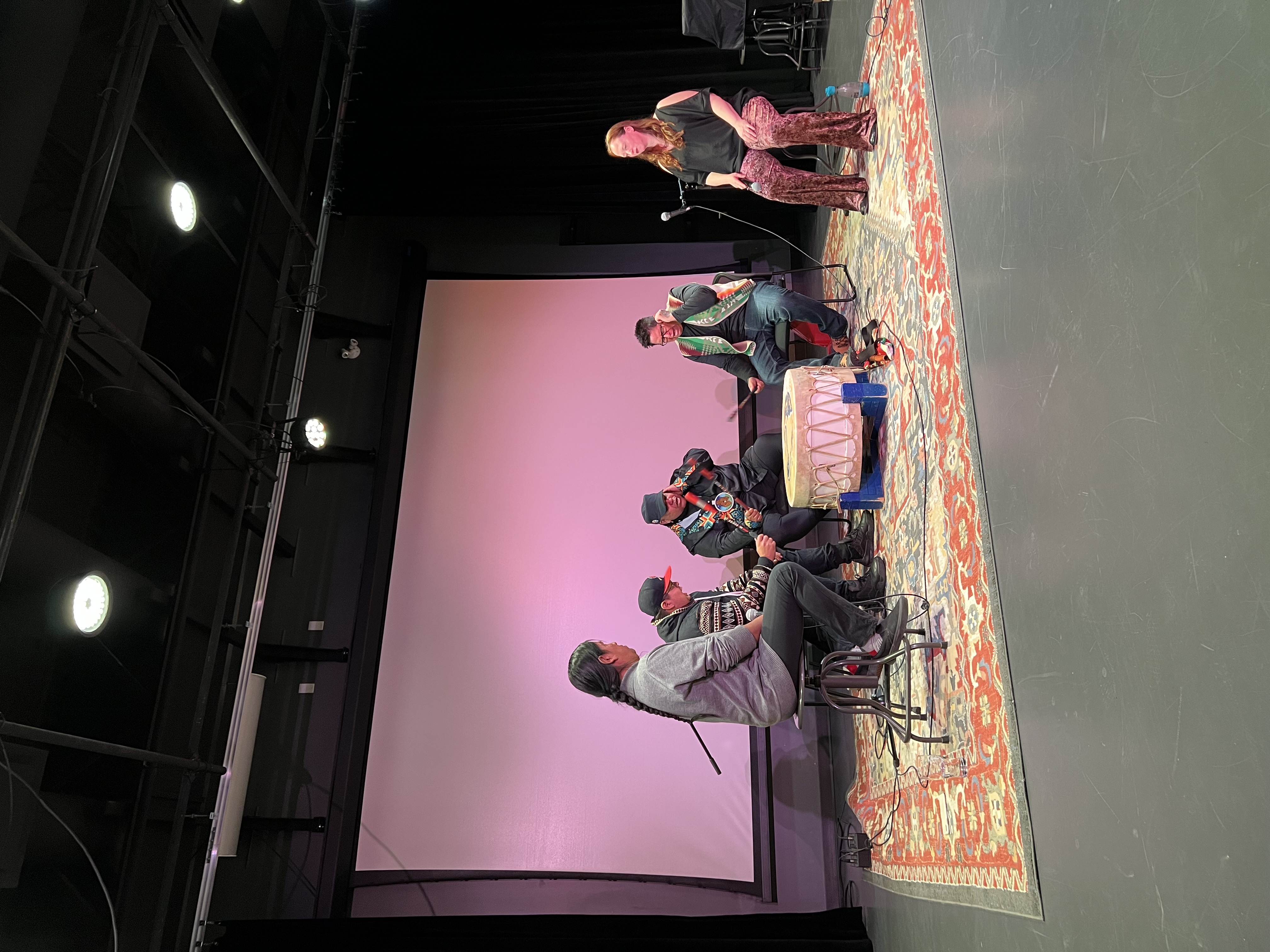 There is concentrated silence in the artsPlace theatre, even though the seats are filled with people. Three Stoney Nakoda men – Anders Hunter, Chris Pegram, and Danzel Ear – are seated in the centre of the stage, around a traditional drum. Their eyes closed, their focus inward. After a quiet moment, they look up at each other, count down, and – in perfect harmony and unison – their strong vocals pierce through the silence.

The theatre becomes alive with the powerful beat of the drum. 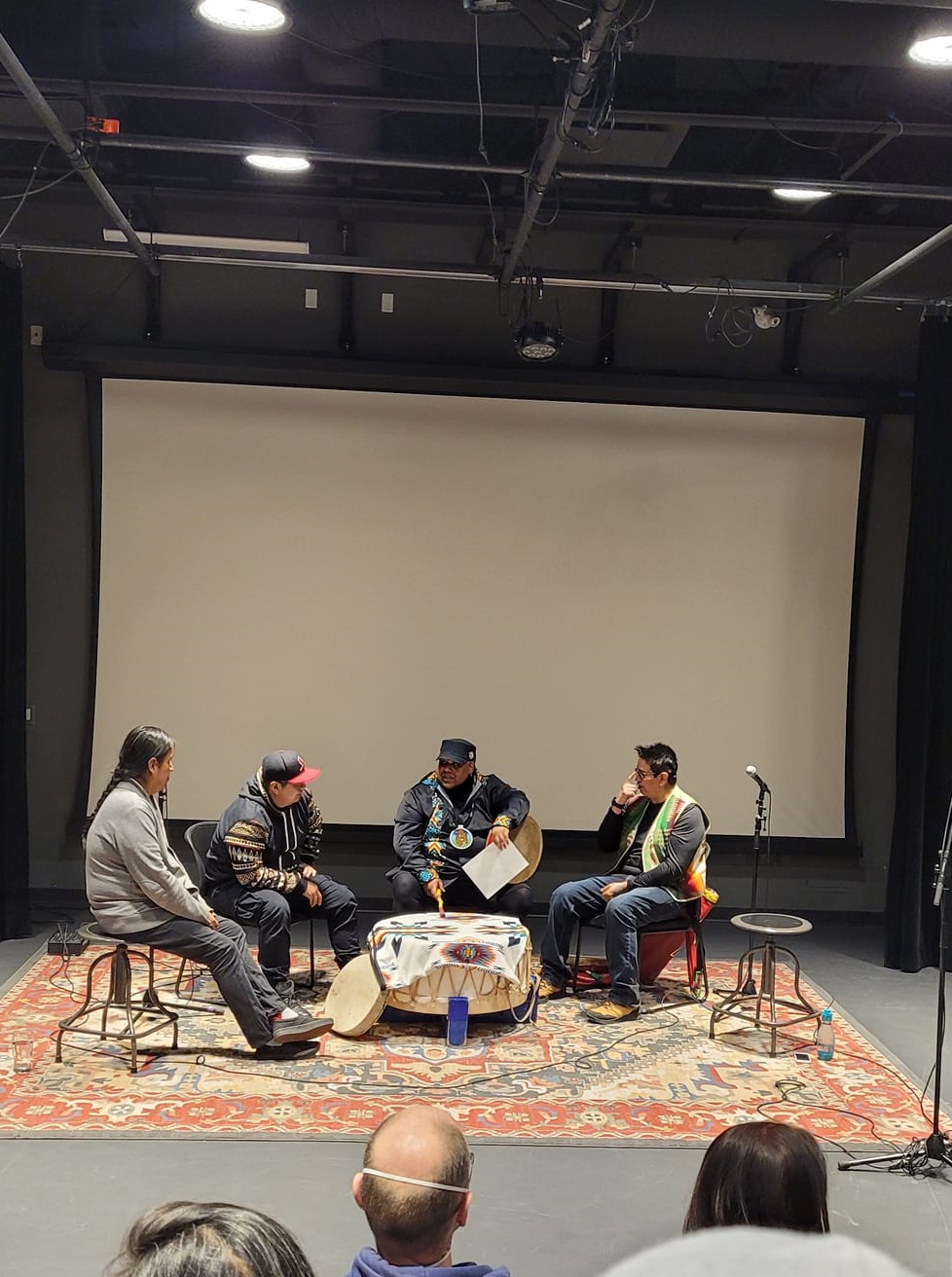 Stoney story has it that the drum is the relative of thunder and this is how it gets its power. It’s also referred to as the grandfather.

“If no one knows where they’re coming from, they sure won’t know where they’re going,” says Chris, who is a cultural coordinator with the Stoney Education Authority. “And this is where we come from; this is part of us. We tie in our traditional way of life to the drum.”

The audience is privy to this sharing of knowledge thanks to Travis Rider, the artsPlace Indigenous Liaison who brought these Stoney musicians together onto the artsPlace stage in October 2022 for the first ever in-person cultural learning circle.

Asked why it’s important to him to bring Stoney culture to Canmore, he says that he wanted to give people from his community the opportunity and space to share their talents with others. But there is more to it.

When Travis first envisioned the cultural learning circles together with artsPlace programs director Nicole Fougère in early 2020, they imagined them as a circle of people sitting together in one room at artsPlace. But no sooner had they imaged that, everything had to transition online.

“When we first started these circles, we asked ourselves, how are we going to be authentic in ourselves and with the people that we bring in who are sharing their ways of being and knowing – especially in the online environment we had to operate in for the first couple of years.”

For Travis and Nicole, bringing awareness and education to artsPlace in an authentic way meant to share a variety of cultures that coexist in the Bow Valley. 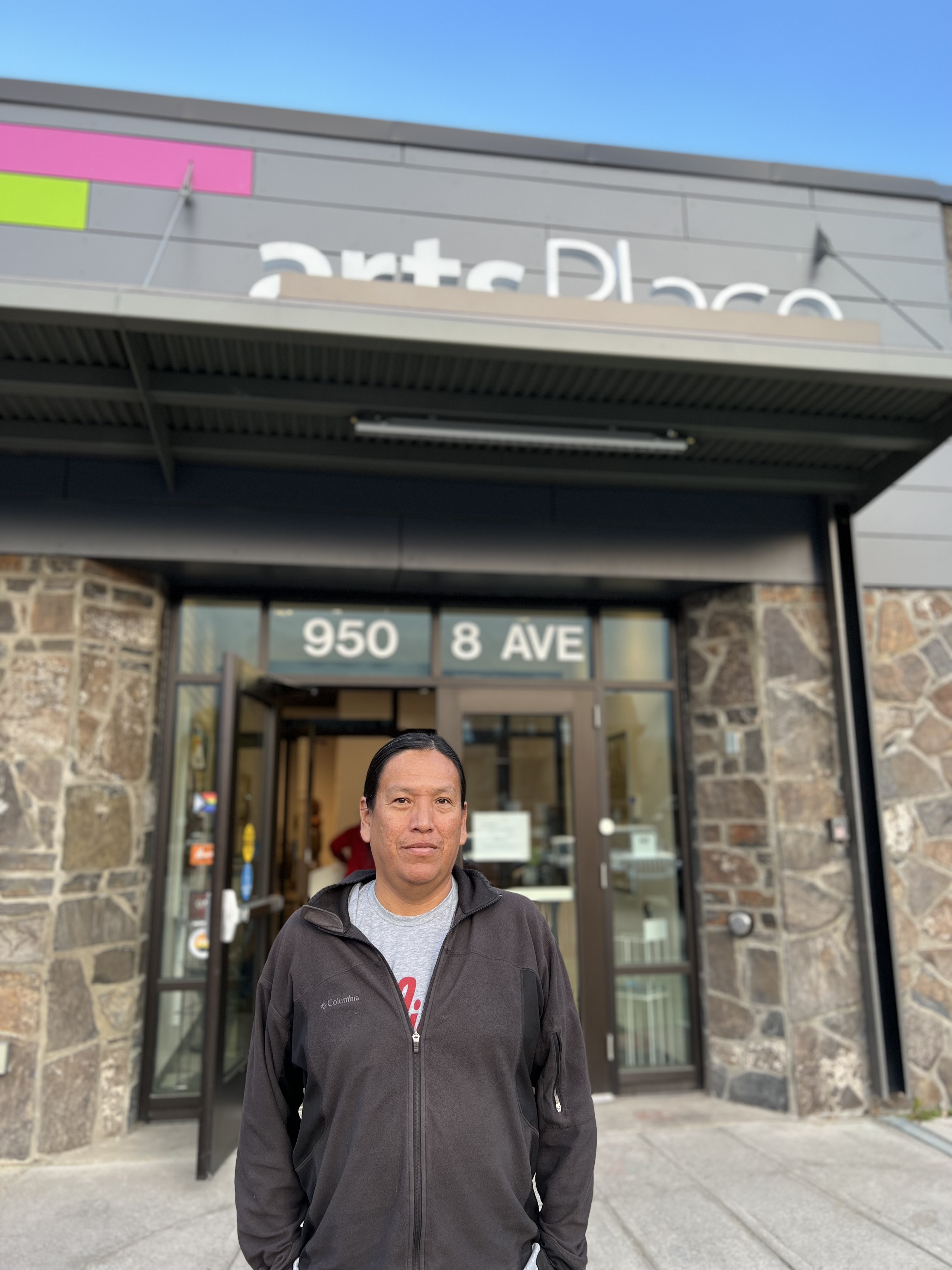 “I wanted to bring that into the cultural circles. Based on the experience of talking with people from my community, oftentimes they came across people who are from other parts of the world but neither one knew much about the other person’s cultural background.”

If we want inclusion, it’s time to start including different perspectives in all conversations, Travis says.

Because of the historical systems of racism that still exist today, there are obstacles in making sure the Stoney community who come to Canmore feel comfortable in sharing their knowledge, Travis says. But more and more Stoney members are willing to share their talents with others and will continue to do so as long as they’re treated with respect in return. 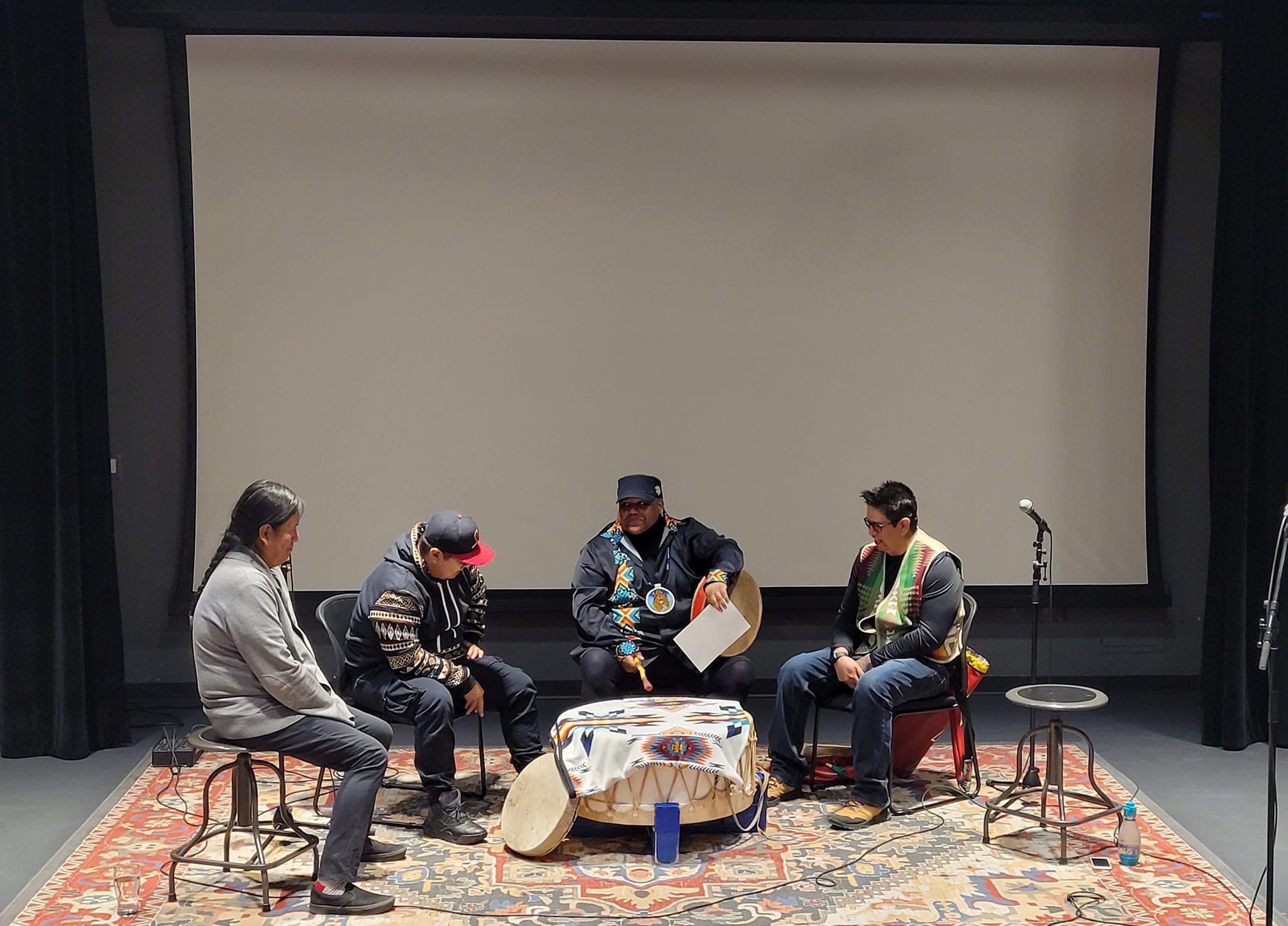 Music was chosen as the subject of the October circle – first ever that was happening in person – because of its universal significance in many cultures.

“Singing has always been part of my culture. When Europeans first encountered the Assiniboine and Stoney people, it was documented that they heard us singing. That’s always been a part of who we are. Whether it’s verbal or spiritual, we are a people who sing.”

What makes singing unique within Travis’s community is that many people still practice traditional ways of singing (some only in Stoney and some in Stoney and English), but many also practice contemporary genres, from country music to classic rock and more. 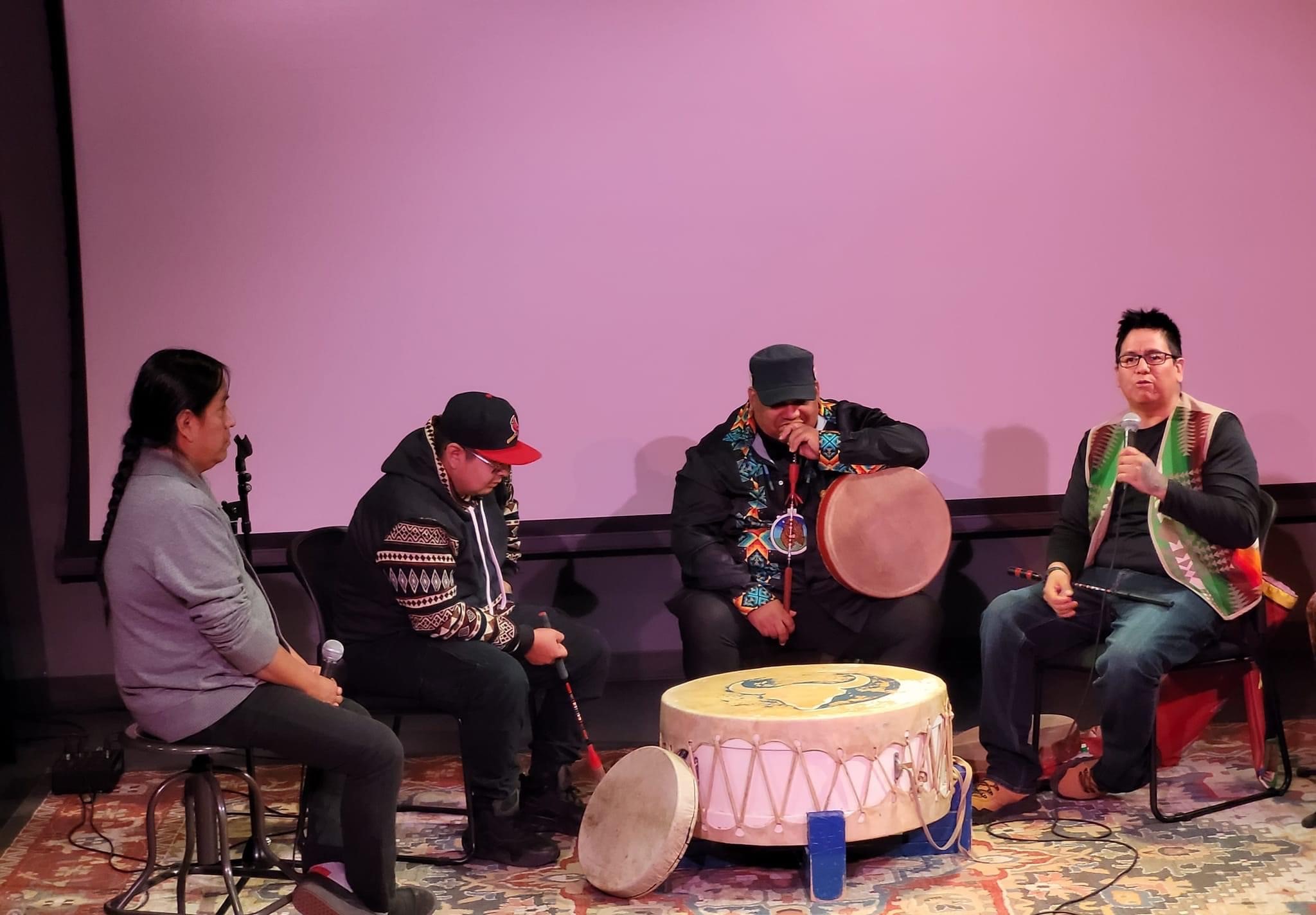 An Okanagan Elder once told Travis that whenever he hears Stoney people sing, the mountains come alive. “You can tell that love and that passion for singing is within us.”

Back in the artsPlace theatre, just as he’s about to play his flute, Anders tells the audience that through his drum, his flute, and his vocals – through the creative aspect of music – he finds healing.

“When we have strong individuals who are sharing the challenges they have overcome or they face in everyday living, we have to remember that we still have to give hope to others who might be at a place or point in life where there’s no hope,” Travis reflects.

As the three Stoney Nakoda men discuss their connection to music, they also share a video of Nakoda Elementary School students singing and dancing. The performance is an unusual mix of traditional and contemporary music, with fancy dance, vocals, and the use of instruments and a turntable. The joy with which the kids perform seems to be leaping from the screen.

“For our grandparents and parents, their experiences in school were vastly different than for these kids; we all know about that,” says Chris. “We are bringing the kids back to the drum; back to our traditions. And we are proud of them for getting out of their comfort zones but at the same time, staying true to themselves.”

“We have intergenerational trauma, but we need to realize that we have resiliency too – because we’re still here. And we’ve got things to do.”